Visit my new blog for updates

This month's What's Baking theme was "Baking with Fresh Herbs".  I considered making a dessert, something with mint, perhaps?  But then I went out to dinner with my husband a few weeks back and in the bread basket was delicious focaccia.  Immediately the wheels started turning in my head and I realized I had found my June dish.  I looked through my many cookbooks and found a recipe for Rosemary Focaccia in How to Cook Everything by Mark Bittman.  Sounded perfect to me!

I made this on a Sunday evening.  I came home from a day out and about, made the dough, then let it rest while I went grocery shopping.  Came back, continued to make it.  When stretching to dough it does have to rest several times for a couple minutes at a time, so I would have to go back into the kitchen every few minutes, so you can't get too caught up in doing something else during that time (I was catching up on So You think You Can Dance, so I just paused the DVR, therefore going back and forth was fine by me).  In all, I think it ended up taking about 4 1/2 hour from start to finish.

What's great about focaccia is that you can really top it with anything you want.  Because this was my first time making it, I was unsure of what we'd like on it.  I put a little bit of onion on, then I wanted to do thin slices of tomato, but the only one we had in our fridge had just gone bad, so I used some slices of grape tomato instead.  I also threw on a few sliced kalamata olives.  I definitely held back in my toppings, so next time I'll be a little more generous.  I also had bought some fresh oregano to put on it, but forgot to include it before I started baking, so I threw a little on when it first came out of the oven.  It didn't bake into the dough, obviously, but still gave off a nice flavor. 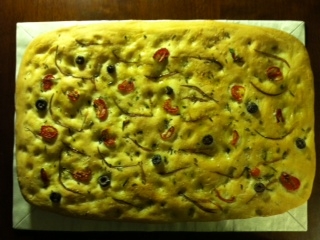 1 - Combine the flour, yeast, and salt in a food processor.  Turn the machine on and add 1 cup water and the oil through the feed tube.

2- Process for about 30 seconds, adding more water, a little at a time, until the mixture forms a ball and is slightly sticky to the touch.  If it is still dry, add another tablespoon or two of water and process for another 10 seconds (in the unlikely event that the mixture is too sticky, add flour a tablespoon at a time)

3- Turn the dough onto a floured work surface and knead by hand for a few seconds to form a smooth, round dough ball.  Put the dough in a bowl and cover with plastic wrap; let rise until the dough doubles in size, 1 to 2 hours.

1 - Lightly knead the dough, form it into a ball, and put it on a lightly floured surface.  Sprinkle with a little more flour, cover with plastic wrap or a towel and let it rest for 20 minutes.

2 - Use 1 tablespoon of the oil to grease an 11x17in jelly roll pan.  Press the dough into a small rectangle and put it in the pan; let it relax there for a few minutes.  Press and stretch the dough to the edges of the pan.  If it resists, let it rest for a few minutes, then stretch it some more.  Sometimes this takes a while, because the dough is so elastic.  Don't fight it; just stretch, rest, then stretch again.  Try not to tear the dough.  Cover the dough and let it rise for at least 30 min or until somewhat puffy.

3 - Heat the oven to 425.  Uncover the dough and dimple the surface all over with your fingertips.  Drizzle with the remaining olive oil and sprinkle with the rosemary and plenty of salt (and other toppings, if so desired)

4 - Put the focaccia in the oven, lower the temperature to 375 and bake for about 30 min, or until the focaccia is golden.  Remove and cool on a rack before serving.  Cut the focaccia into squares and serve with meals or as a snack.  Or cut squares in half horizontally and use to make sandwiches.  Focaccia, well wrapped (first in plastic, then in foil) freezes fairly well for 2 weeks or so.  Reheat, straight from the freezer (unwrap, remove the plastic, and then rewrap in foil), in a 350f oven for 10 to 15 min.
Posted by Joanna K at 10:59 AM

Email ThisBlogThis!Share to TwitterShare to FacebookShare to Pinterest
Labels: Side Dish